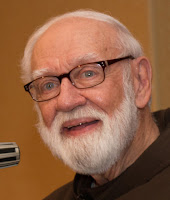 Fr. Murray Bodo, OFM, was in the midst of a personal crisis when St. Anthony Messenger Press asked him to write a book about St. Francis of Assisi. He couldn’t, he thought. Besides, he was extremely busy teaching and carrying out other duties. Then the editor told him he would be taking time off and going to Assisi.

A sound of awe murmured through the audience at the Quinquennial Congress Thursday evening (June 30).

“That’s the same thing I said,” he responded to the crowd. Of course, he told the editor, “yes!”


Once he was in Assisi, the book seemed to write itself. “I wrote almost every day in the morning. The words just came. I thought someone was writing it for me… I felt I was a channel.”

He appeared at the Q to thank Secular Franciscans for being among his most avid readers – and to share a few words from his latest work, his autobiography, Gathering Shards: A Franciscan Life.
Posted by R Stronach at 9:49 AM