The first congress was held in Chicago in 1921. 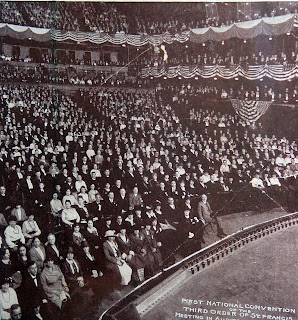 Third Order members from all over the U.S. were gathered as one family for the first time. Some 600 friars, diocesan priests, prelates and Tertiaries were in attendance.

Delegates proposed to the Provincials that one national Third Order organization be formed, with a Directive Board and an Executive Council.

The report of this congress, together with additional material on the Third Order, was published in the First National Third Order Convention, USA, edited by Fr. Hilarion Duerk, OFM, Chicago, 1922.

The picture shows the theater auditorium filled with 4,300 Tertiaries. Many Tertiaries of the city had to return to their homes, being unable to procure seats.

The second congress was held in New York City in 1926.

This congress emphasized the Third Order's mission in two areas -- recruiting the young and formation of fraternities at non-Franciscan churches and institutions.

The third congress was held in San Francisco in 1931.

The theme was social reform through the medium of individual reform. Catholic Action was the essence of the program. Subsequent literature proved its effectiveness. Combined reports of the second and third congresses were published under the title, Survey of a Decade: The Third Order Secular of St. Francis in the United States,by Fr. Maximus Poppy, OFM, and Paul R. Martin, TOF, MA, St. Louis, 1935.

The fourth congress was held in Louiville in 1936.

The work of the previous congress was continued and presented as a well-defined program of Catholic Action -- the Three Point Program of Popular Economics. The congress report appeared in the booklet, The Franciscan Heritage: Proceedings of the Fourth National Tertiary Congress, edited by Paul R. Martin and Fr. Maximus Poppy, OFM. It should be noted that this congress, and those up to and including the 12th congress, was covered in the Franciscan Herald and Reform.

The fifth congress was in Pittsburgh in 1941.

It commemorated the 20th anniversary of the formation of the national organization and the encyclical Sacra Propendum of Pope Benedict XV. It witnessed to active participation of young people in the ranks of the Third Order. The congress overcame a last-minute hotel strike; local religious communities and schools offered accommodations to save the day.

The sixth congress (delayed a year due to World War II) was in Cincinnati in 1947.

It highlighted a Return to Christ Through the Family, in as much as good Christians and Franciscan life are the aim of all Tertiaries.

The seventh congress was held in Milwaukee in 1952.

The eighth congress was in Boston in 1957.

The congress celebrated the 75th anniversary of the encyclical of Pope Leo XIII, Auspicato. The theme, Franciscan Way of Life, was based on the 1956 discourse by Pope Pius XII. The keynote address was given by Archbishop Richard J. Cushing, Episcopal protector of the Third Order in the United States.

The ninth congress was held in Detroit in 1962.

The theme was, The Third Order in the Life of the Church Today, in light of the encyclical, Mater et Magistra, of Pope John XIII. Many Tertiaries attended the sessions and workshops. The keynote address, based on the theme, was made by Robert Alerding, TOF.

The tenth congress was held in Philadelphia in 1967.

The theme was Franciscan Renewal Today. Panel discussions, workshops and "buzz" sessions were integral to the congress with references to the documents of Vatican II. The keynote address was given by Thomas Recard, TOF.

It was described as a Week of Community during which lay Franciscans, sisters, and priests prayed and shared together, striving to understand what it means to be a Franciscan in today's world. A separate Youth Congress was held in Rensselaer, Indiana.

The 12th congress was held in Collegeville, Minnesota in 1977.

The theme was, Evangelization, Francis' Gift to America -- The Word Made Flesh in Our World.Manuela Mattioli, TOF, minister general, Third Order of St. Francis, was a featured speaker.

The theme was Live, Learn, Love the Rule. This was the first Congress organized solely by Secular Franciscans, with the encouragement of the friars. Computers were used for the first time in the administration of the congress. The talks and small group discussions focused on insights into better understanding the importance of the Apostolic Commissions: Peace and Justice, Family, Work and Ecology.

The theme was Christ's Faithful People, the Challenge and Response. It was based on the Post-Synodal Apostolic Exhortation, Christifideles Laici by Pope John Paul II, on The Vocation and Mission of the Lay Faithful in the Church and in the World. A vision statement summarized the theme of the Congress: fidelity to love for the Church and the Franciscan Way of Life, responsibility to rebuild the Church through our faithfulness to prayer and service to all people, centered on the theological virtues of faith, hope and love.

The theme was Now is the Time - The Kingdom of God is at Hand. Secular Franciscans, friars and religious gathered together to face the upcoming millennium with a strategy of leadership, an authentic experience of community, and a vision to build a world based on Christ's values. It was a challenge to Secular Franciscans to return to the excitement of its founding story. Sr. Brenda Hermann, MSBT, facilitated sesseions on Refounding.

The theme was Many Cultures through Francis - in Clare. The Congress focused on the multicultural aspect of the Secular Franciscan Order in the USA. Episcopal priest, Fr. Eric Law, provided us with an in-depth educational program of multiculturalism, reminding us that what we see in others is only the tip of the iceberg; there is much more under the surface to which we should become sensitive.
The 18th Congress took place in 2012 in Chicago.
The theme - Why Francis? Claim the Gift! 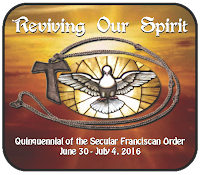 The theme was Reviving Our Spirit.
The Secular Franciscan Order in the United States sponsors a Quinquennial Congress every five years to bring together the Franciscan family from all over the U.S. and even other countries. The exception to the five-year practice is the 2016 Q, which came four years after the previous Q, so that the 2021 Q would fall on the 100th anniversary of the first Quinquennial Congress. However, that plan changed when COVID-19 concerns forced delaying the "Q" to 2022.