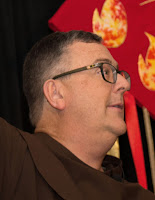 Keith Warner, OFM, stood at the podium and proclaimed: “‘Laudato Si’ is the most Franciscan papal encyclical ever!”

Brother Keith raised his voice and repeated that statement. “Yeah!” the crowd exclaimed. Then the friar shouted: “ ‘Laudato Si’ is the most Franciscan papal encyclical EVER!” “YEAH!” the audience shouted back.

“We are in a Franciscan moment in the church,” he said, noting: “St. Francis is featured prominently in this encyclical, more so than any encyclical ever.  He is promoted as an example for Christian living today, in the 21st Century.”

St. Francis is cited as an example of “integral ecology” – the relational and holistic connection of nature, God and humanity.

Brother Keith pointed to another connectedness – “the cry of the poor” and “the cry of the earth.” Care for the poor and care for the earth are together, always. Pope Francis is engaging in a dialogue that one cannot protect the earth without protecting the poor, and vice versa.

A third item he pointed to was how the encyclical uses the Franciscan approach to ethics – that nature has dignity and value, and that “Laudato Si” helps shift the conversation to an ethics of care that sees the world in a loving relationship. It incorporates a sense of global consciousness and the common good.

He encouraged the crowd to look for six Franciscan gems in the encyclical:

2. Humanity’s relationship with the Earth should be characterized by praise of God and appreciation of beauty. “Many of our conventional environmentalist friends don’t approach creation with these attitudes.”

3. The common good is global, in need of collaborative approaches and dialogue.

5. Recognizing beauty as a path to God, and love of beauty as a spiritual practice. “Beauty is another name for God in our tradition.”

6. We are called to ecological conversion. He quoted: “An ecological conversion can inspire us to greater creativity and enthusiasm in resolving the world’s problems and in offering ourselves to God ‘as a living sacrifice, holy and acceptable’.”
Posted by R Stronach at 3:18 PM