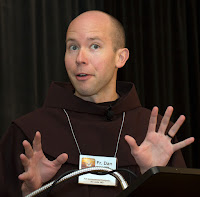 The Gospel is the good news. But for whom?

It can comfort the afflicted. But it can also afflict the comfortable – those who need to be nudged out of their comfort zone in order to better respond to the call of the Gospel.

He noted that his topic of Racism and Xenophobia may surely make some uncomfortable.

In fact, the “Good News should make us uncomfortable. We need to be awoken.”

He pointed to the fact that the site of the Q is just 3.8 miles from Ferguson (which became a symbol and hotbed of racial unrest). People may not realize that social status and institutional structures may foster racial attitudes.

Friar Dan said St. Francis renounced the power structure of his time, quitting his social status, embracing evangelical poverty, and acting on the notion that he was no better than anyone else – he and his brothers were, in fact, lesser or minor. For example, he went against church and civil practices and social customs to embrace lepers. Like leprosy of that bygone era, racism is a loaded word, Father Dan suggested. Understanding racism goes beyond just seeing individual acts of meanness. It recognizes a more complex condition involving attitudes and biases perpetuated by cultural, institutional and class experiences. Perhaps there are indicators of systemic injustice and ingrained bias, such as: more inmates of color are on death row, and some bandages are marketed as “flesh” toned.

As Franciscans “we have to open our hearts” and “listen to each other’s experiences.” With the Franciscan vocation, “we’re called to stand up against injustice.”

To counter Xenophobia (fear of that which is different, foreign, strange), one needs to embrace the other. Just like people today, Francis found himself raised in the context of a discriminatory world view. For example, there were civil and ecclesiastical rules affecting lepers. They were required to ring bells announcing their approach. Francis, however, didn’t let fear stop him from breaking from such traditions; and he instructed his brothers “to serve those that are different from you” and “acknowledge you are Christian.”

He felt a solidarity with Muslim sisters and brothers. How could he do it? “No one had to fear Francis... (He had) no lust for power or control.”

He saw common ground in faith and humanity.

And Franciscans are challenged to stand up, to speak out.

As witnesses to the Gospel, he concluded, “it calls us” to take risks.
Posted by R Stronach at 1:27 AM